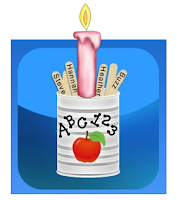 Since its debut in the iTunes App Store on June 2, 2011, just over one year ago this week, thousands of teachers and administrators from all over the world have been discovering how easy it is to incorporate higher order thinking skills into their daily lesson plans.

Although it has been a successful year for my development team and I, we are continually working on Stick Pick to make it even better. Got and iPad? Wouldn't it be great if Stick Pick could take advantage of all that screen real estate? Get ready, because this summer, Stick Pick is coming to iPad.

True, but using Stick Pick on the iPad is like using a giant, pixelated version of the iPhone version. While this does technically work, it's not very elegant. That's why over this past year, I redesigned the user interface for iPad to take full advantage of its large screen, as well as integrated an optional "landscape" mode. But the best part is, Stick Pick is going to be released as a "universal app," which means, this summer, iPhone and iPad users won't need to purchase the app again! The update will be free!

But perhaps the most exciting Stick Pick-related news of the summer is that Stick Pick is coming to Android! Currently in its final stages of beta-testing, Stick Pick, like it's iOS cousin, has also been in development for several months. Similarly, Stick Pick for Android will also be available as a single application, optimized for both smartphone and tablet form factors. So, get ready for the Summer of Stick Pick!

And as always, thank you for your comments, emails, and suggestions. Keep them coming. We're listening!